Exasol doesn’t need much administration but getting distribution right matters

Exasol uses a clustered shared-nothing architecture with many sophisticated internal mechanisms to deliver outstanding performance without requiring much administration. Getting the distribution of rows between cluster nodes right is one of the few critical tasks left, though. To explain this, let’s say we have two tables t1 and t2: 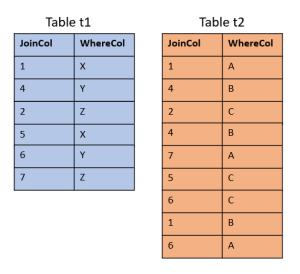 The two tables are joined on the column JoinCol, while WHERE conditions for filtering are done with the column WhereCol. Other columns are not shown to keep the sketches small and simple. Now say these two tables are stored on a three-node cluster. Again, for simplicity only active nodes are on the sketch – no reserve nodes or license nodes. We also ignore the fact that small tables will be replicated across all active nodes.

Without specifying a distribution key, the rows of the tables are distributed randomly across the nodes like this:

The two tables are then joined:

Internally, this is processed as a global join which means network communication between the nodes on behalf of the join is required. This is the case because some rows do not find local join partners on the same node:

then the same query can be processed internally as a local join:

Here every row finds a local join partner on the same node so no network communication between the nodes on behalf of the join is required. The performance with this local join is much better than with the global join although it’s the same statement as before.

Why you shouldn’t distribute on WHERE-columns

This distribution is actually worse than the initial random distribution! Not only does this cause global joins between the two tables as already explained, statements like e.g.

will utilize only one node (the first with this WHERE condition) and that effectively disables one of Exasol’s best strengths, the Massive Parallel Processing (MPP) functionality. This distribution leads to poor performance because all other nodes in the cluster have to stand by being idle while one node has to do all the work alone.

Evaluate the effect of distribution keys with value2proc()

The function value2proc() can be used to display the effect that a (new) distribution key would have:

Distribution on JOIN-columns leads to local joins which perform better than global joins: Do that!

Distribution on WHERE-columns leads to global joins and disables the MPP functionality, both causing poor performance: Don’t do that!